The most recognizable symbol for the United States of America is the bald eagle. The bald eagle has no natural predators. Its greatest cause of death is from drowning in the process of hunting salmon or trout. This happens on occasion when it wrongly estimates the size of a fish and is subsequently pulled underwater by the weight of its prey. When this occurs, the bald eagle drowns if cannot unlock its talons quickly enough.

The bald eagle’s downfall is caused by misjudgments formed through its own overconfident sense of existence. For this reason, the greatest enemy of the bald eagle is itself, just like the nation it symbolically represents.

We are living in an age filled with hyperbole, contradiction and a pervasive sense of tension. These days of overconfidence and insecurity have unsettled the moral and ethical standards of a civilized society. These paintings are observations on this current condition.

The scope of my investigation became smaller during the development stages of the work. Turning inward, I focused on what was happening to me in the moment. This process revealed expansive but raw feelings about my experiences living and breathing through times like these. The results are deliberately reflective but far more autobiographical in nature than I ever expected. 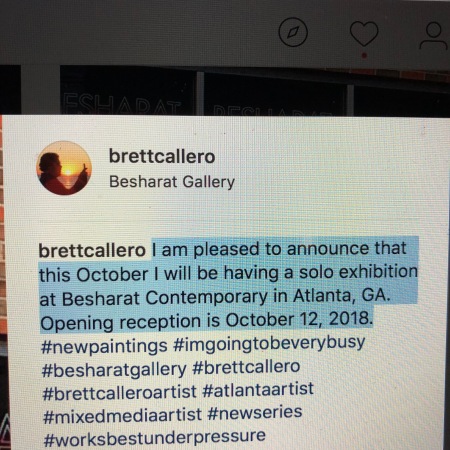