“Social media is training us to compare our lives, instead of appreciating everything we are. No wonder why everyone is always depressed.”

“Inspiration does exist, but it must find you working.”

I’m as focused as I can be. Other than seeing clouds as thought bubbles, my imagination is focused on this new body of work. I’m hunkered down, but I’ve still got a million fragments that I’m furiously weaving together into a cohesive visual experience (or something like that). I’ll be hunkered down continuously until October.

I’ve got some things to say, so I keep on fighting! 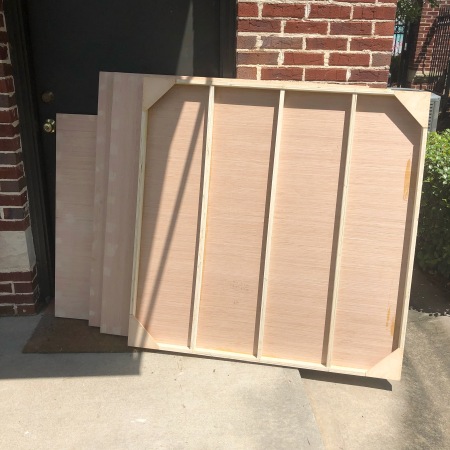 “If Trump is right — and he is so smart that he must be — then this could mean Americans wanted exactly what they are getting right now: a president who burns alliances, insults allies, sides with Putin over the American government, ignores Russia’s abuses and bashes the free press across Europe.

If so, if we Americans really did want this, Trump has proved his point about our intelligence.

As a wise man once said: Stupid is as stupid does.”

“If you pluck the chicken one feather at a time no one will notice.”

It’s Monday afternoon, July 16th. I’m working in my art studio trying to make progress on a new series of paintings. President Chump just completed his astonishingly disgraceful press conference with Vladimir Putin and I have decided I needed to immediately post about the subject.

As an artist, I am motivated and influenced by contemporary culture and our beliefs and relationships (and that includes politics). Therefore, the news, good or bad, can be inspirational. Unfortunately, this has become more difficult for me during the Donald Trump administration. This is true for a variety of reasons. It’s probably attrition more than anything, Trump is so fucking exhausting. That’s why I’m headed out for a walk after I complete this post. I need to reclaim a little of the energy sucked away from me by thinking about Captain Douchebag.

Because it just happened, I know this blogpost is more of a reaction than a response. Regardless, you can mark my words, this moment is a turning point. It will go down as one of the most embarrassing moments in our history. President Chump was tougher on the Democrats and the intelligence community in this press conference than he was on the Russians. It’s hard to put into words what we saw today. I’m wondering if we finally, finally, finally reached the beginning of the end.

John McCain, as we all know is living his final days. He had a lot to say about today. I disagree with McCain more than half of the time, so I do not automatically support anything he says. However, here he perfectly crystallizes the embarrassment happening right before our eyes. His words from today will be remembered and quoted for many, many years to come:

“Today’s press conference in Helsinki was one of the most disgraceful performances by an American president in memory. The damage inflicted by President Trump’s naiveté, egotism, false equivalence, and sympathy for autocrats is difficult to calculate. But it is clear that the summit in Helsinki was a tragic mistake.

“President Trump proved not only unable, but unwilling to stand up to Putin. He and Putin seemed to be speaking from the same script as the president made a conscious choice to defend a tyrant against the fair questions of a free press, and to grant Putin an uncontested platform to spew propaganda and lies to the world.

“It is tempting to describe the press conference as a pathetic rout – as an illustration of the perils of under-preparation and inexperience. But these were not the errant tweets of a novice politician. These were the deliberate choices of a president who seems determined to realize his delusions of a warm relationship with Putin’s regime without any regard for the true nature of his rule, his violent disregard for the sovereignty of his neighbors, his complicity in the slaughter of the Syrian people, his violation of international treaties, and his assault on democratic institutions throughout the world.

“Coming close on the heels of President Trump’s bombastic and erratic conduct towards our closest friends and allies in Brussels and Britain, today’s press conference marks a recent low point in the history of the American Presidency. That the president was attended in Helsinki by a team of competent and patriotic advisors makes his blunders and capitulations all the more painful and inexplicable.

“No prior president has ever abased himself more abjectly before a tyrant. Not only did President Trump fail to speak the truth about an adversary; but speaking for America to the world, our president failed to defend all that makes us who we are—a republic of free people dedicated to the cause of liberty at home and abroad. American presidents must be the champions of that cause if it is to succeed. Americans are waiting and hoping for President Trump to embrace that sacred responsibility. One can only hope they are not waiting totally in vain.”

“Snowflakes is a word used by sociopaths in an attempt to discredit the notion of empathy.”

“The President of the United States trusts the word of a former KGB agent over the consensus of the American intelligence community backed by a ton of facts. That is a shocking reality. Everyone who excuses Trump’s behavior must answer that now, and when history inevitably judges.”

“When Trump was elected, there were three parties in Washington: the Trump party, the Democratic Party and the Republican Party. The Republican Party had every chance to put a check on his vile personal conduct, his administration’s outlandish corruption, his fetishizing and affinity for autocrats around the world and his undermining of the western alliance.”

“We’re in heavy times, with a global rise in authoritarian regimes; I often feel like I’m choking on my own dread of what may come.”

“I have spent much of my life working in GOP politics. I have always believed that both parties were two of the most important institutions to the advancement of human freedom and dignity in the history of the world. Today the GOP has become a danger to our democracy and values.”

“The British people can face any misfortune with fortitude and buoyancy as long as they are convinced that those who are in charge of their affairs are not deceiving them, or not themselves dwelling in a fool’s paradise.”

“We all make compromises every day to get by. However, if you’re making compromises in your art to get ahead in the art world, you sacrifice the most important aspect of your life.”

“I seem to have a licence to be naughty. Graham Chapman gave it to me and it’s still valid. In fact the older I get, the more valid it becomes because the self-righteous need my help, in their struggle for self awareness.”