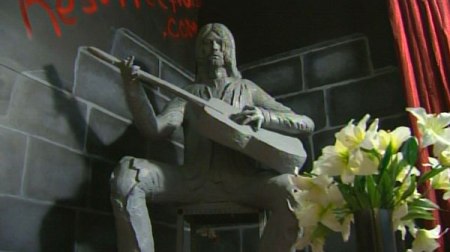 This statue of Kurt Cobain is a stupid idea for dozens of reasons. However, I’d like to focus on three of them in particular.
1. Why would the city of Aberdeen, WA choose to honor it’s most famous citizen (and most famous critic) in this manner?
2. Why would the city of Aberdeen, WA think that fans of Nirvana would flock to their city for something like this. Especially because its very existence is completely in contrast to the mission of the band and the struggles with fame that Cobain experienced.
3. Why is he crying and playing an acoustic guitar?
My answer to all three questions is the same. It’s because there were not any Nirvana fans or anyone with a significant knowledge on the life of Kurt Cobain involved with the project. This is an assumption, but I feel safe in making it.
Here is a link to an article about the statue:
http://www.king5.com/news/local/Mayor-Cobain-Day-should-have-happened-long-time-ago-246438551.html